Warning! Unfortunately your browser has disabled scripting. Please enable it in order to display this page.

A celebration was held on Tuesday 23rd January 2018 to showcase the achievements of a new programme that rejuvenated a community garden and gave people over the age of 25 new skills. At the event volunteers from Groundwork North Wales’ Task Team programme celebrated their hard work at Community House, Brynteg, Wrexham. 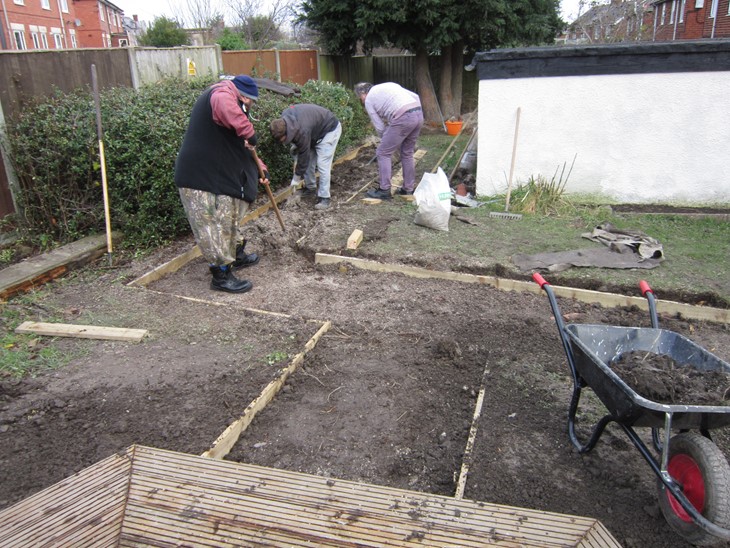 Task Team is a new initiative supported by the European Social Fund through the Welsh Government Innovation Fund for people over 25 years old living in a Communities First cluster. Groundwork North Wales is running the project along with their partner Communities for Work.

The volunteers who signed up for Task Team put in over384volunteering hours into the 12 week project, spending two days a week learning new skills on an accredited course on volunteering and first aid, as well as tackling a practical project and making a huge difference to the local community by regenerating the garden behind Community House in Brynteg, Wrexham. The garden had become overgrown and unmanageable but is now easy to manage and low maintenance.

The Task Team volunteers have gained new confidence,  had new experiences and worked as part of a prosperous team, resulting in positive outcomes such as progressing onto new qualifications like improved literacy skills  and horticultural skills.

Gary Bruffell, Green Skills Co-originator at Groundwork North Wales said:" I'm really proud of everyone involved in the project; they've all developed new skills and gained a lot of confidence which will only enhance their prospects of improving their chances in life and using the new skills they have learnt."

Debbie Long, Employability Skills and Training Co-ordinator said: "Everyone has worked really well, putting a lot of time and effort into this project; they have gained new skills, formed new friendships and overcame barriers. With confidence levels improved, some of these students have and will progress. They should be proud of themselves as I am of them"

Rob from Gwersyllt, Wrexham was just a few years off retirement when he was made redundant which led to a loss of confidence. He joined the Task Team project to learn new practical skills and now wants to go on to do more volunteering and make a difference in his local community.

Rob said, "It's been an excellent project and I have learnt new skills, I would like to do another project like this one and I am now looking forward to starting a  local Men in Sheds project"